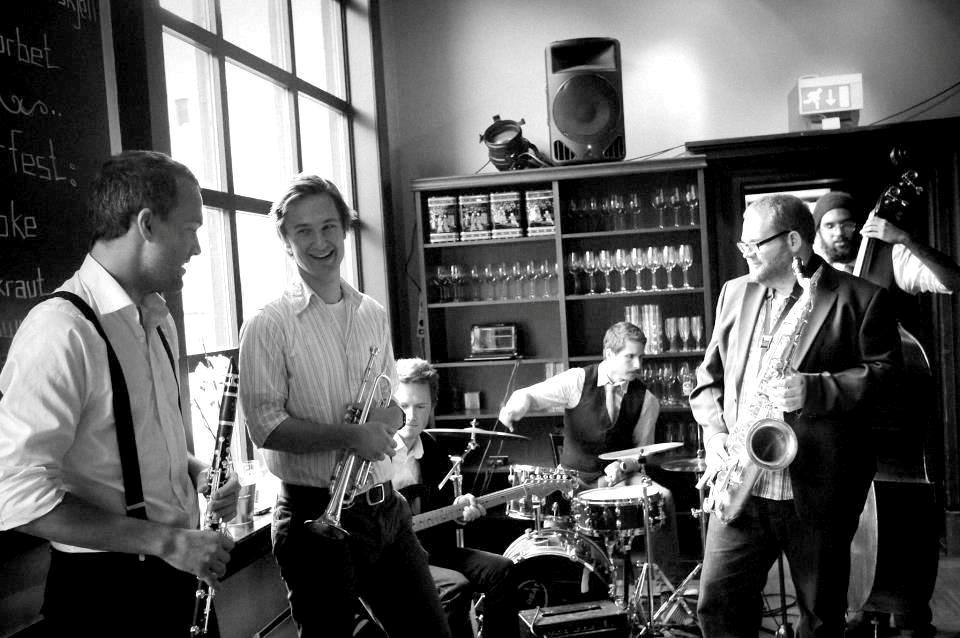 At the concert that day the band will Shoeshine Boys carry the American trumpeter and vocalist Troy “Satchmo” Anderson.

SHOESHINE BOYS is a young jazz band basis of Oslo.

They were established in November 2008. The band plays New Orleans-based traditional jazz mixed with rhythm and blues. In December 2008 the band had its debut concert at New Orleans Workshop Jazz Club Mr. Nilsen who break band of Magnolia Jazz Band Over the recent years the band has played at various jazz clubs in Oslo. In 2009 and 2011 the band was invited to play at Mountain Jazz Festival as the youngest band to have performed at this festival. This is certainly one of the bands that will lead gla’jazzen on.

These seven young men are:

Troy “Satchmo” Anderson is a jazz musician who is well known in the US and Europe, and that impresses primarily as a fantastic version of Louis Armstrong. He has all it takes to give the audience a sense that there is an Armstrong who act for them. He is in the United States known as the one who “does” Armstrong best, after Armstrong himself. He is a credible entertainer. He is real.

Troy Anderson has a background that makes him confident that he is doing. He grew up in a musical family in Florida, whose parents are from Bahamas. It all began with cornet when he was 10 years old. The teens were brass and gospel that applied, and the 70 and 80s were most Drum and Bugle Corps. These are bands appearing at various events manger, which is fairly typical in the United States.

He came as a paratrooper to Germany, but was for a time in the mission of the military leadership to set up a show with only Louis Armstrong hits. For three years he led the US Army Jazz Showband. After that he has been Louis Armstrong almost full time. In recent years he toured with “Troy” Satchmo “Anderson and The Wonderful World Band”, but also a trio with Hungarian jazz musicians. He lives part of the year in Germany and Hungary, but visiting other words now Tønsberg Jazz club.

There are several videos of him online. If you like what you are experiencing today, why not take him up whenever you like.

Rejoice! This will be fun!

We also remind that the hotel offers entertainment every Saturday!

As a rule, this buffet, and then helps jazz club financially to keep the buffet price of a nice level, currently kr. 150, -.

Welcome to a nice jazz experience!